Hands down, one of my favorite recipes for lasagna.  This takes a little time to prepare, since it is not dumping in sauce from a jar, but well worth the time.

I like to add a little extra spice to this dish.  If you don’t like the spice, simply take out some of the red pepper.

For the Swiss: artichokes can me found at Migros by the olives in the “antipasti” section.  They come in jars or bags. 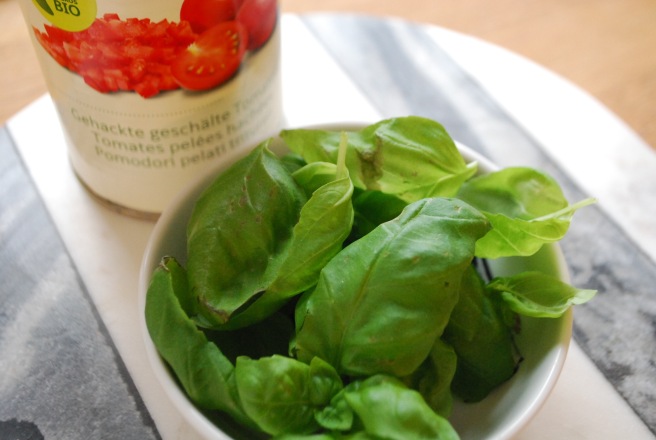 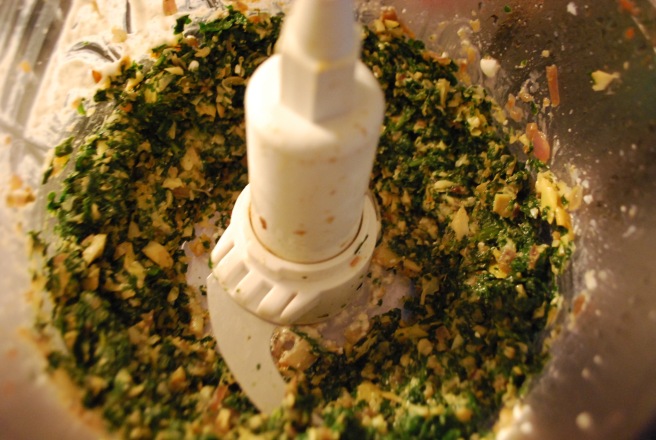 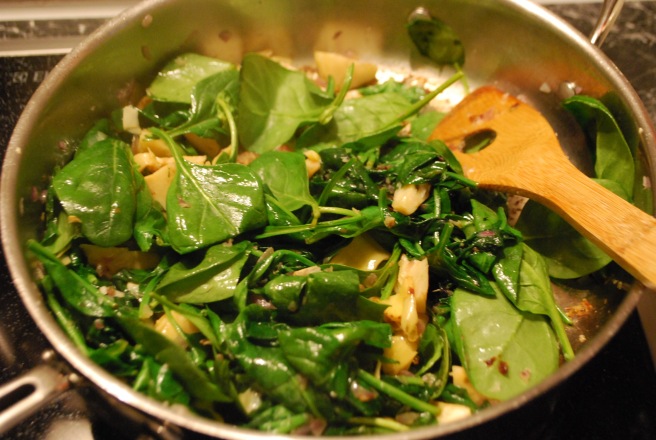 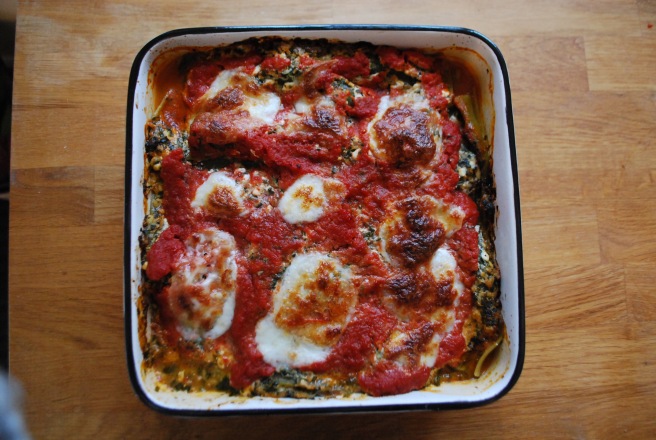 I love Thai food and living in Switzerland means I can never have it.  There is just something about paying 25 CHF for a Pad Thai that I know only cost around 3 CHF to make.  Not to mention, it doesn’t taste nearly as great as the Pad Thai in the States.  Thank goodness for Cookie and Kate.  Quick, easy and healthy alternatives to going out!

I use to love when Mom would make sloppy joes.  Lately I’ve been craving dinner dishes from the past.  However, this has proved to be difficult, since I use to eat meat and since 9 years ago I stopped.  Thank goodness for the internet and the plethora of recipes out there from other vegetarians and vegans.

*Note: In Switzerland I have not been able to locate mustard powder.  To solve the issue, I took mustard seed and tried to grind it down with a pedestal and mortar. I also melt a little Gruyere cheese on the bun before assembling.

May 28: Open Cellars in Geneva

November 22-27: West Side Story in Basel

January 12, 2016January 12, 2016 ~ sprinklemeswiss ~ 2 Comments
Who doesn’t love a good lemon bar?  Honestly, anything with lemon gets me excited.  I love going to a boulangerie in Lausanne or Morgins and buying a tarte au citron.  But who can afford to spend 3 – 5 CHF every time you want a bite of delicious sweet lemon goodness?

I came across this recipe on facebook from a friend that had reposted it.  It obviously looked good, so I tried to recreate it.  Thank goodness that this one already had the conversions to grams!

Side Note: good luck finding flaky sea salt here in Lausanne.  If anyone has any ideas, please let me know.  I used regular large sea salt and put it into the food processor.  It sort of worked 🙂 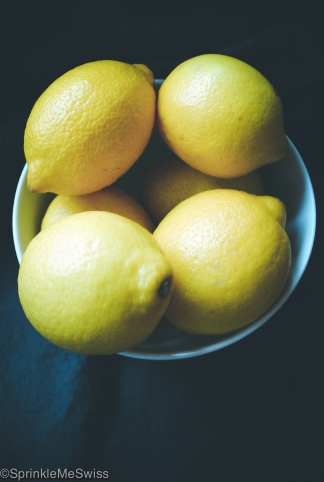 I found that taking a small glass to roll the shortbread dough inside the pan works best.

Coming out of the oven to cool at room temperature, then the fridge.  Time to serve.  Delicious! 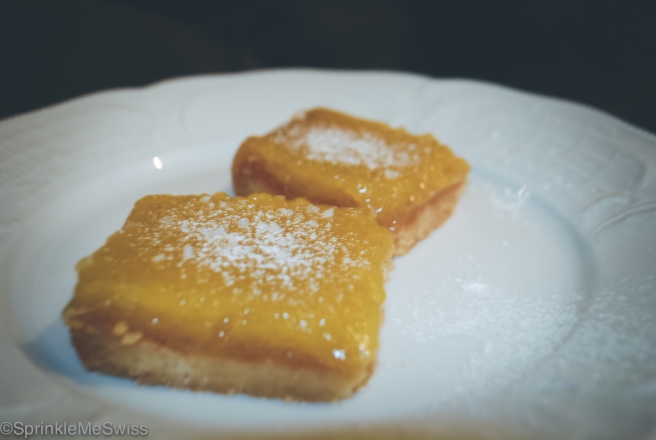 I was so excited when Food52 came out with their best recipes of 2015 last week.  If you don’t know Food52, its a genius (yes they have #genius recipes) online source for recipes and online store for accessories.  I came across this recipe and knew it was going to be a hit.  But as always, I worry about cooking American recipes in Switzerland, I typically always have to substitute some ingredients for others, but finally…a recipe that’s perfect.

The more I eat kale, the more I read about the preparation of kale and how to make it taste even better!  Have you ever massaged your kale? Yea, I didn’t until now.  I kept reading that this method makes eating raw kale much easier by breaking down the structure of the leaves and enhancing the flavor at the same time.  Definitely a two-fer for me.

Start with washing your kale.  Remove any tough ribs.  I always fold the kale in half, along the center thick rib and then slice rib off, leaving 2 halves of the leaf.  Remove any other thicker ribs that you find.  Chop the kale to your liking.  Bite sized pieces are good here.

Place chopped kale in bowl.  Sprinkle with some salt, drizzle of oil and a tablespoon (+/-) of fresh lemon juice.   Massage gently with your hands.  You will be able to feel the leaves becoming easier to work with. Do this for 1-2 minutes.

I toasted the walnuts before I started the recipe.  Good thing about walnuts, they break apart in your hands quite easily, so no need to take out the food processor to chop the nuts.

I was worried about finding the beans in that in Switzerland I wouldn’t be able to find dried or canned beans that I could use, however Migros surprised me.  Now I prefer dried beans, but in a pinch I will substitute canned.  This was one of those times. Migros has Habriots de Soissons blancs (large white beans) available.  Now onto the trickiest part of the recipe, making sure that the beans are in a single layer and that you flip every single one of them. 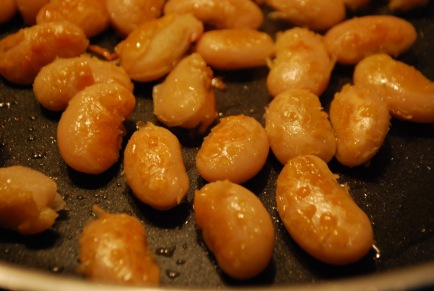 A one pot wonder comes alive. 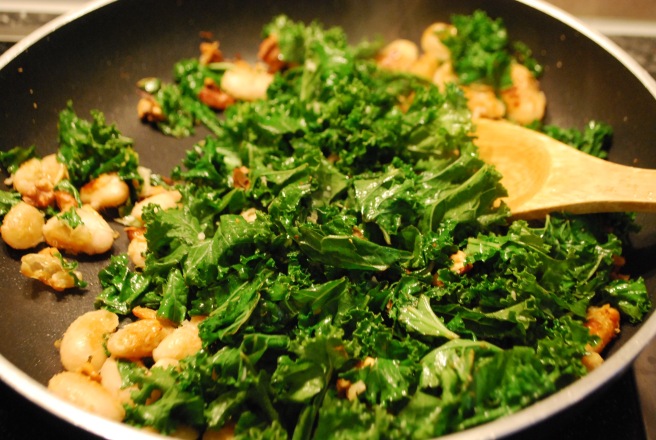 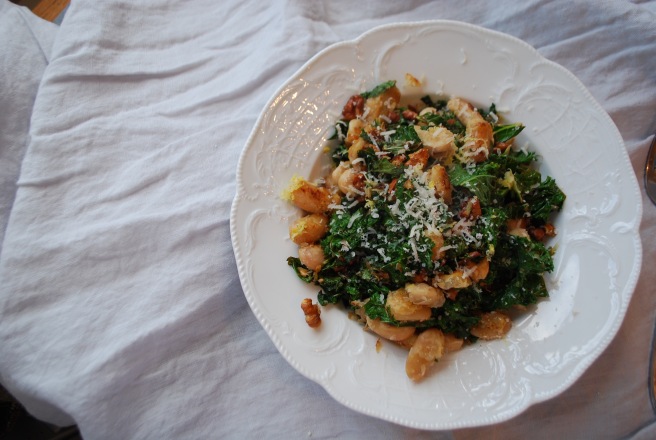 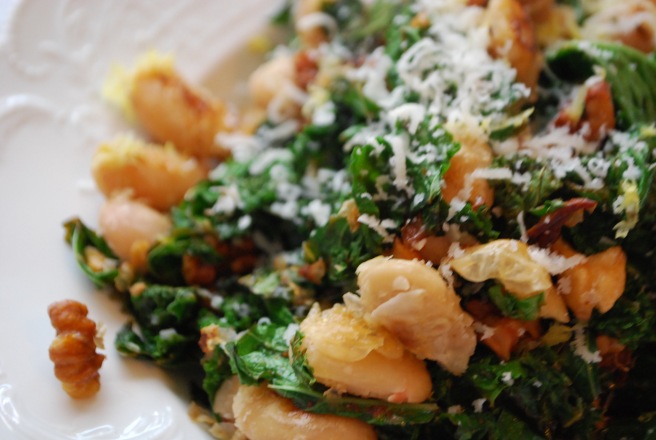 Apples and cinnamon, yum, classic Fall flavors. Even better, when it is use in a muffin with zucchini and no butter.  Genius, right? Just in time for our first snowfall this weekend, I selected to bake these yummy treats for our car ride to Alba, Italy.

Swiss Note: since in Switzerland many ingredients are not available, I have modified the recipe to for the Expats 🙂 I made buttermilk by adding some lemon juice to the milk and letting it set for 10 minutes.  Gala apples are easy to find, but Granny Smith is a bit tricky…sometimes I find them at Coop or Denner and I make my own vanilla.

Adapted from: Two Peas and Their Pod

1. Preheat oven to 375F/190C degrees . Line a muffin pan with paper liners or spray with cooking spray. Set aside.

2. In a large bowl, whisk together flour, sugar, baking soda, baking powder, salt, cinnamon, and nutmeg. In a small bowl, whisk together buttermilk, applesauce, oil, egg, and vanilla extract. Pour the wet ingredients over the dry ingredients and mix with a wooden spoon or spatula until just combined. Do not over mix. Gently stir in the grated apple, zucchini, and chopped apples.

3. To make the topping, combine turbinado sugar and cinnamon in a small bowl. Stir well.

4. Fill the prepared muffin pan with muffin batter, filling each cup about 3/4 the way full. Sprinkle each muffin with cinnamon sugar topping. Bake for 20 minutes, or until muffins are golden and a toothpick inserted in the center of a muffin comes out clean. Let muffins cool to room temperature and serve.

I always grew up hating brussels sprouts, didn’t every kid?   I never had them growing up, but I always heard others saying how gross they were.  It wasn’t until last year that I finally broke down and tried them and wowsers, I fell in love.  I had them roasted at a restaurant in Zurich and vowed to be able to recreate a sprout that I could eat at home.  I have finally found it! And the best part…I can make it here in Switzerland, despite the recipe being American #dailychallenge.

*Note, you may use dried Black-eyed peas, however be sure to cooked them prior to beginning this recipe.  Shockingly enough, Switzerland actually had canned peas vs dried.  Such a time saver!

Make sure to prep the sprouts but cutting off a little of the brown stem at the bottom and remove any brown or damaged leaves.  Rinse sprouts and cut into quarters.

Place sprouts and onions on a baking pan to roast.  Pay attention to the onions.  Since they are much smaller than the sprouts, they are more likely to become burnt before the sprouts.  My oven cooks a little faster than most, so I would recommend checking the veg around 12 minutes.

Ok, so my veg became a little bit on the crispy side, which normally would be bothersome, however in this dish, it just adds another layer of flavor!

1/2 tsp dried red pepper flake (or more, depending on your taste)

Adapted from Green City Market Cookbook. Recipe by Debbie Sharpe, owner, Feast Restaurant and The Goddess and the Grocer.

It all starts with a recipe from a famous chef and you realizing that you will never be able to recreate that dish. C’est faux. Last night I created a wonderful dish from House Montali in Umbria.

| Adapted from The Vegeterranean | 2 servings |

Place all ingredients, except cheese, in food processor, blend until combined, pulse. Pour into bowl and mix in cheese. 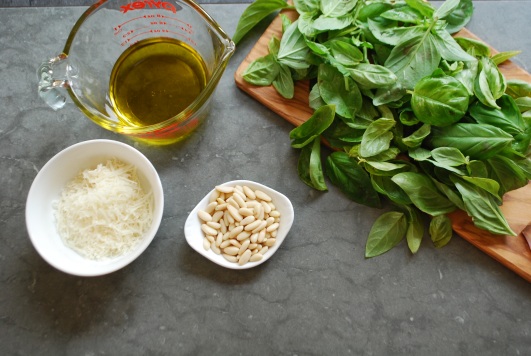